- Serving Clients Throughout The United States - 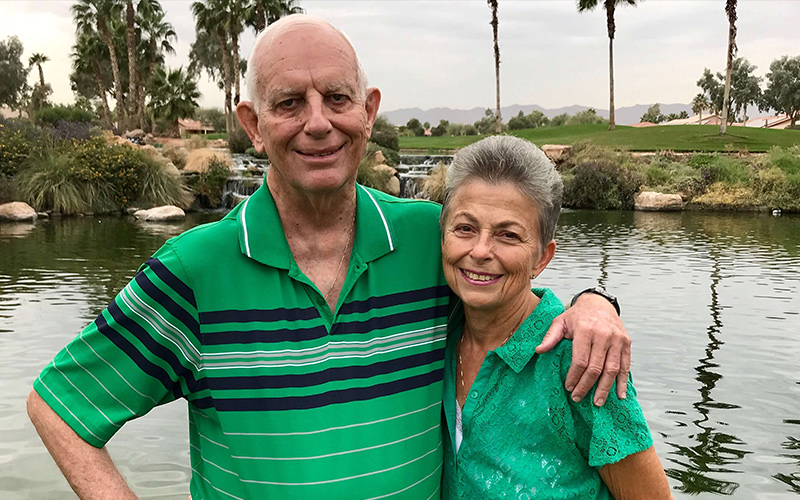 Art and Linda-Sue moved to Goodyear, AZ after 25 years living in Annandale, VA and a 6-year dream trip travelling by motorhome all over the country, to the mountains of Alaska all the way to the beaches of Puerto Vallarta, Mexico.

Art was in the Navy for many years flying Airborne Early Warning Planes (AEW) and Anti-Submarine Warfare Airplanes. He was also selected to go on Exchange Officer Duty with the Royal Navy and lived in Haverfordwest, Wales UK for two years. Additionally, Art went to the Naval Postgraduate School, Monterey, CA and receive his Master’s degree in Financial Management. During this time, Art’s wife and child passed away in the delivery room leaving Art with a three and five-year-old to take care of. A month or so before completing his Master’s degree, Art met Linda-Sue on campus. She had flown in to visit her brother. They were married five months later while Art was on his second tour at Moffett Field, CA … making her an instant Mother of two (and later adopted them). Before meeting Art, Linda-Sue had gone to San Jose State and received her BA in Education. She taught school in California for eight years. Then she changed her career. Linda-Sue wanted to increase her contact with adults and also broaden her horizon with travel. For the next 22 years, she was a Flight Attendant with TWA. This gave Linda-Sue the opportunity to meet people from all walks of life and travelled all over the world. She was based in Los Angeles when she met Art. From then on wherever Art was assigned, she transferred to the nearest TWA base.

After Moffett Field, Art began work at the Pentagon followed by a tour of duty as the Commanding Officer of the Naval Reserve Center Adelphi, MD. After 20 years in the Navy Art retired and became the Administrative Officer for the Science & Technology Division of the Institute for Defense Analyses in Arlington, VA. He worked there for 15 years before he retired a second time. Now, much of Art’s life is tied up with Pickleball … playing in tournaments, starting classes to instruct newbies (going on 8 years now) and being on the Board of Directors with his Club in Goodyear, AZ.

When asked about their greatest accomplishment Art & Linda-Sue are quick to answer that having their two intelligent, and employed children who also blessed them with two beautiful grandchildren. Along with their 6-year motorhome adventure “that did not end in divorce”!

Even after their 6-year adventure on the road, when asked what their future goals are, they are happy to share that they will be accomplishing their biggest remaining item on their bucket list in the Summer of 2018 … a cruise to Alaska. They have now lived for 12+ years in PebbleCreek and enjoy beautiful days, smoking foods, gardening, reading, entertaining neighbors/friends with dinner parties in Goodyear and in the summers at their home in Prescott. And don’t forget lots of Pickleball to stay active!